How service providers can use Kubernetes to scale NFV transformation

This post originally appeared on LinkedIn. Republished with permission by Jason Hunt, Distinguished Engineer of IBM.

After attending two major industry events—IBM’s Think and the Linux Foundation’s Open Networking Summit (ONS)—I’ve been thinking about how software and networking are evolving and merging in a way that can really benefit service providers.

It’s been interesting to watch how NFV has changed over the past few years. At first, NFV dealt simply with virtualization of physical network elements. Then as network services grew from simple VNFs to more complex combinations of VNFs, ONAP came along to provide lifecycle management of those network functions. Now, with 5G on the doorstep, service providers will need to shift the way they approach NFV deployments yet again.

Why? As Verizon’s CEO Lowell McAdam told IBM’s CEO Ginni Rometty at IBM Think, 5G will deliver 1GB throughput to devices with 1ms of latency, while allowing service providers to connect 1,000 times more devices to every cell site. In order to support that, service providers need to deploy network functions at the edge, close to where those devices are located.

But accomplishing that kind of scale can’t be done manually. It has to be done through automation at every level. And for that, service providers can leverage the kind of enterprise-level container management that’s possible with Kubernetes. Kubernetes allows service providers to provision, manage, and scale applications across a cluster. It also allows them to abstract away the infrastructure resources needed by applications. In ONAP’s experience, running on top of Kubernetes, rather than virtual machines, can reduce installation time from hours or weeks to just 20 minutes.

At the same time, service providers are utilizing a hybrid mixture of public and private clouds to run their network workloads. However, many providers at ONS expressed frustration at the incompatibility across clouds’ infrastructure provisioning APIs. This lack of harmonization is hampering their ability to deploy and scale NFV when and where needed.

Again, Kubernetes can help service providers meet this challenge. Since Kubernetes is supported across nearly all clouds, it can expose a common way to deploy workloads. Arpit Joshipura, GM Networking at the Linux Foundation, demonstrated this harmonization on the ONS keynote stage. With help from the Cloud-CI project in the Cloud Native Computing Foundation (CNCF), Arpit showed ONAP being deployed across public and private clouds (including IBM Cloud) and bare metal. Talk about multi-cloud! 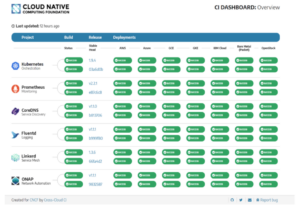 At ONS, AT&T’s CTO Andre Fuetsch stated, “Software is the future of our network.” With 5G getting closer to the mainstream every day, the best-prepared service providers will look at how to combine the best of the software and network worlds together. Exploring the benefits of a Kubernetes-based environment might just be the best answer for their NFV deployment plans.